(Regal) Ryan Brent, the manager of our San Mateo store just sent me these photos of his Free Comic Book Day crowd. As you can see, there was quite a turn-out! Check out our San Mateo location if you have a chance. Ryan and his great staff, have been making it better all the time.

In order to unwind a little, we loaded up the dogs and headed to the beach on Sunday. We were amazed that it only took us a little over a half an hour to get to Capitola beach from our home in San Jose. The traffic was excellent. We were also amazed to find a parking spot right by the beach. We took the dogs off leash and let them play their favorite doggy sport. We call it Doggy Football. You can see how it works in the photos below. Connie throws the Frisbee, and Molly (The little dog) runs like mad and does a spectacular catch, thrilling onlookers. Then Humphrey (The Big dog) grabs it out of Molly's mouth, and brings it back to the thrower, amusing onlookers. I soon took over for Connie in the throwing. Molly must have caught the Frisbee fifty times. In the evening, we headed to Pizza My Heart for a slice, checked out some of the great stores, and then got some Ice Cream. It was the perfect way to relax after a hectic Free Comic Book Day. I have a felling we'll be going back real soon.

Connie throws the Frisbee. Molly hauls out after it, with Humphrey trailing.

Molly caught it, but Humphrey has taken it away.

Humphrey brings back the Frisbee.

Hannah, Sophie, and Connie.
Posted by Lee Hester at 6:19 PM No comments:

Have you heard the new phrase, "Cash Mob"? It's like when a bunch of people organize a "Flash Mob", but instead of irritating onlookers with their lameness, they delight an independent retailer by visiting his or her store on mass and spending at least $20 per person.

Free Comic Book Day at Lee's Comics 2012 was like a Cash Mob! This was, by far, our busiest Free Comic Book Day yet. We haven't seen a single day of sales this good for many years! It didn't hurt that the Avengers opened the day before, smashing all previous box office records, and delighting nearly all fans and critics. A bunch of us Bay Area dealers got together and ran full-page color gang ads in the Mercury News and Metro newspaper to promote the event. I also ran an ad in the Daily Post, and did a mass mailing to my customers. There was also a great deal of Free Comic Book Day talk on Facebook, Twitter, and other social media. I think it's safe to say that the general public likes comic book characters. Even when I was at the beach the next day, I saw many people were wearing a shirts adorned with their favorite Super-Heros. These characters seem to be here to stay.

There was a nice big line of people before the event began, and that line kept up for most of the day. As usual, I set up a stand outside to give out the free comics. My friend Mark Arnold assisted me as he has done every year. It was a beautiful, bright, sunny day here, and families were coming in by the carload. I like to give the comics away outside, so that everyone knows that there are no strings attached. You can take your comics and leave if you want. Amazingly, almost everyone went inside and shopped. For much of the day the line for the register wrapped all the way around the store. Everyone had a ball!

Artist Tom Rollinger showed up at noon and started sketching, mostly for tips. People really enjoyed his artwork. He was mobbed the whole time. This is his 2nd year here at Free Comic Book Day. He will be back again. We'll be making this an annual tradition.

Even though we upped out orders on comics, we totally ran out by 5:00 pm. This was unfortunate, but out advertising did advise that people come early for best selection. We substituted by letting late comers pick comics from the bargain bins. Next year, we will up our orders even more, but make sure to come early! Thank you to everyone who attended! I had a great time being entertained by everyone. Comic book fans are the greatest! Now for some photos from the event:

Assisted by the intrepid Mark Arnold.

The store is mobbed.

People loved the Lee's Comics Frisbees!
We were giving away 100 per store.
They were the first item to go.

Hundreds of people of all ages had a ball choosing their free comics. 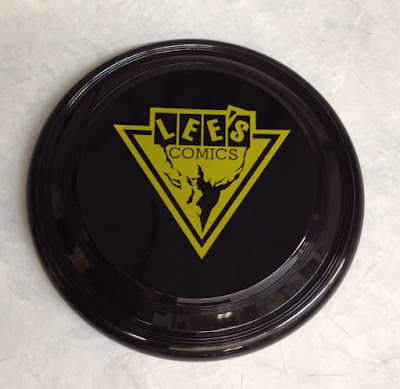 Everyone at Lee's Comics is looking forward to a fabulous Free Comic Book Day!
To add to the fun, were giving away free Lee's Comics Frisbees at both stores.
100 per store. One per family, while they last.

Posted by Lee Hester at 4:41 PM No comments: 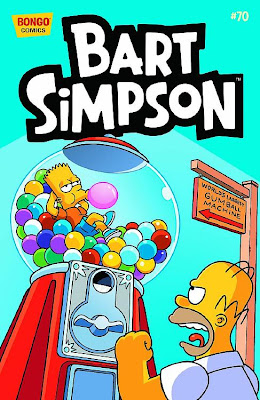 I was very happy to see my pal Michael Aushenker hit the big time! He's the writer of the feature story on Bart Simpson Comics, which is now on sale at Lee's Comics. They don't hire just anyone to write the Simpsons, you know. This very issue also features the great Sergio Aragones. Grab your copy while they last!

Posted by Lee Hester at 1:53 PM No comments: