Merry Christmas from your friends at Lee's Comics!

To celebrate the Holidays, and to get you in the mood for gift-giving, we present this look at some of our favorite Christmas comic book covers from the Golden Age. 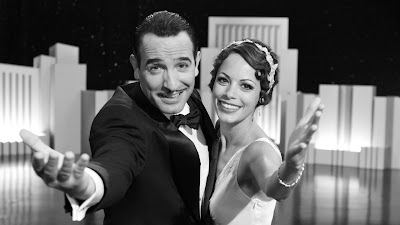 I'm a big movie fan, and I try to go to the theatre at least once a week. I like to see old movies (particularly at the Stanford Theatre) as well as new ones. I try to see the best of the new films that come out, of all genres. I heard good things about "The Artist", so I went and saw it this evening. I absolutely loved this film!

It's a black and white, and mostly silent tribute to silent films. Every detail is pitch perfect, starting with the credits, and moving on the the acting, make-up, clothes, and general attitude. That's a very difficult thing to carry off, in fact, I would have thought impossible, but, the film maker did it! It is filled with one stunning scene after the next. I laughed, and I'm not ashamed to say that I also cried. This is a great movie, and it's rare artistry of the highest order. It's also a heck of a lot of fun to watch. It's great for the whole family. See it, especially if you are a film fan. It is a film about film, like two other great Movies, "Sunset Boulevard", and "Singin' in the Rain". Those two films happen to be favorites of mine, and I will add "The Artist". to my list of favorite films. certainly my favorite film of the year.

Right now, the film is only playing on a very limited basis. Lucky for Peninsula residents, it's playing at the Palo Alto square. See it, you'll love it!
Posted by Lee Hester at 9:36 PM 1 comment: