After that stimulating time at the Museum, we made our way to the Porter Valley Country Club. As we were getting out of the car, Jack Davis’ car pulled up next to us. I said hello to Jack and his wife Deana, and walked them to the building. Inside, there was an amazing display of framed Davis originals that the CAPS members had brought. One of the paintings was a tribute to Hirschfeld, which was an amazing tie-in to our visit to the Museum.

The tribute to Jack was terrific. There was an incredible outpouring of affection for this great artist. Jack could not have been more humble. Sergio Aragones got up and told many amusing stories about him and Jack at the famous Mad Magazine trips to spots all around the world. There was a great video presentation. There were letters of congratulations from Jimmy Carter, and Gerald Ford. Jack was presented with a brand new award called the Sergio. It was a terrific statue designed by its namesake.

Later on in the evening, there was a surprise. They handed out a 2nd Sergio award. It went to Sergio himself. People then got up to praise Sergio, including Jack Davis. Mark Evanier told some very amusing stories about Sergio.

This was a really wonderful evening. It will stay with me for a lifetime. 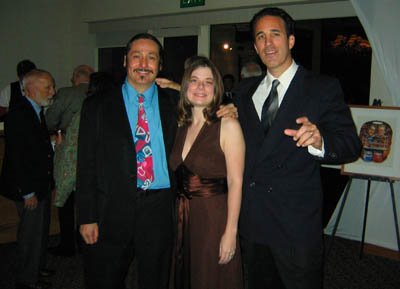 Here’s my pal Rafael Navarro, Jennifer, and Me. 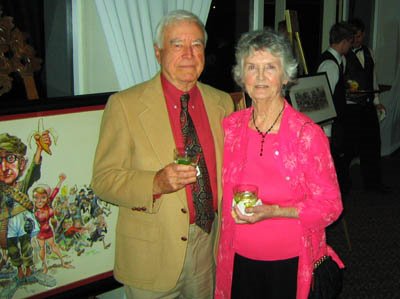 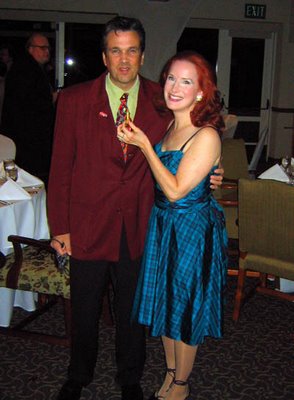 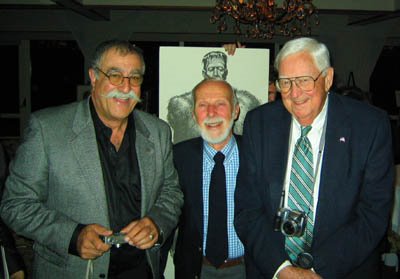 One of my all-time favorite artists is Jack Davis. I had the pleasure of commissioning a painting from him and later spending some time with him and his wife Dena in 1998. I will never forget how kind and gracious he was. When my friend Jerry Boyd invited me to join him at the Cartoon Art Professional Society’s tribute dinner for Jack, I jumped at the chance. Jack does not get out to California very frequently. He lives in Georgia.

The dinner took place at the Porter Valley Country Club in Northridge, near Los Angeles, on Sunday October 21st. I flew to LA on Saturday morning, and Jerry picked me up at the airport. We spent the day touring around in LA. Jerry could not have been a more gracious host. It was like having my own private driver for the day. I was overwhelmed by his generosity and hospitality. Jerry took me to Hi De Ho comics on Santa Monica Boulevard. It was a fun and funky store. I’ve now seen Meltdown, Golden Apple and Hi De Ho. I must say that with stores of this caliber, comics retail is quite vibrant in the LA area. We visited the incredibly affluent Beverly Hills. We saw the mansions of Bel-air. They made the stately homes of downtown Palo Alto seem like shacks in comparison. Jerry and I each dreamed about hitting it big and getting a home there with a circular driveway and a fountain in front. We saw the painfully rich and skeletally thin women shopping on Rodeo Drive.

Later on we visited the Museum of Television and Radio. There is an amazing selection of the great Hollywood caracticure artist Al Hirschfeld’s artwork on display throughout the building. Jerry and I took our time enjoying at each one. These paintings were stunning. Their simple elegance, and simplicity reminded me of Harvey Kurtzman. There were a few color paintings on display as well. Hirschfeld’s use of color was surprisingly sophisticated. Here was a man who had mastered his techniques before he chose to simplify them. I commented that the only thing better than this display would be a display of Jack Davis originals. If you get a chance to visit the Museum, you can choose from an amazing selection of TV shows to view there. I chose the first Nixon Kennedy debate from 1960, a Phil Silvers special from 1960 called “Summer in New York”, and a 1956 “What’s My Line” appearance by Silvers. Jerry and I watched them together.

The Nixon Kennedy debate was very interesting. Kennedy looked handsome, poised, and presidential. Nixon looked shifty slightly paranoid, and ill at ease. You could see the sweat collecting at his chin. He also had bad teeth. Perhaps our later views of Nixon and Kennedy colored our viewing of them in the past, but you couldn’t help rooting for Kennedy and disliking Nixon. Next up was the Phil Silvers special. It was hilarious. It started off showing Silvers’ smiling and contented face. He is being hand fed grapes by Broadway stars Carol Haney and Carol Lawrence. The special contains musical numbers and very amusing skits. It’s must see viewing for Bilko fans.

Next we saw a “What’s My Line?” show from 1956. The panelists included Dorthy Killgallen, and Fred Allen. They tried to guess the line of work of the guest by asking a limited number of yes or no questions. I was struck by the intelligence, grace and wit of the panelists and the announcer. It was a real pleasure to watch, even before Phil Silvers came on. Before his turn, the panelists had to put on blindfolds so they wouldn’t know who it was. He also chomped down on an apple, and grunted the answers, so they would not recognize his voice. They found him out soon enough anyway. It turns out they were all great friends. Silvers then told a very amusing story. This was a real pleasure to watch. 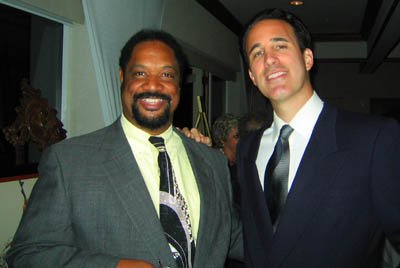 Jerry Boyd and me at the Porter Valley Country Club. 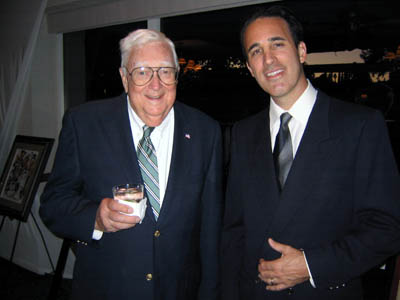 Jack Davis and Me.
Posted by Lee Hester at 11:44 AM No comments: