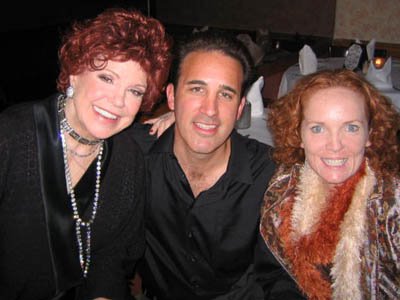 Those that know me know that I am a big music buff. My all-time favorite album is "The Hottest New Group In Jazz" by Lambert, Hendricks, & Ross. You may not have heard of them. They sing in a style called jazz vocalese. Their most modern adherents are the Manhattan Transfer. Another big fan is Joni Mitchell, who recorded the song "Twisted" from that album on her top selling album "Court and Spark". Annie Ross was later to appear in concerts with Joni Mitchell. She also had a memorable role in Robert Altman's "Short Cuts." Annie Ross was playing at just a few blocks from our hotel at Danny's Starlight Room on Saturday. We got back from Liberty Island in time to make it there. 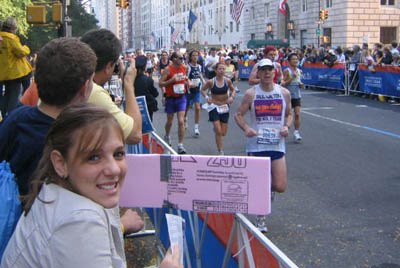 Sunday was all about the New York Marathon. Connie got up early to take a shuttle to the starting line on Staten Island. A marathon is 26.2 miles, and this one goes all over New York, crossing 5 bridges. From Staten Island the runners crossed over to Brooklyn via the Verrazano-Narrows Bridge, then to Queens via the Pulaski Bridge, to Manhattan via the Queensborough Bridge, to the Bronx via the First Ave/Willis Ave Bridge, and back to Manhattan via the Madison Ave Bridge. The race finishes in Central Park. I made my way there by foot, stopping for a pretzel from a street vendor.

I took up a post about a half a mile from the finish line. I had a good view, and I made friends with Ron Rotunno from Brooklyn his kids Carol, Charles, Olivia and Raelyn who were there to root for their brother-in-law, NYC firefighter Terry McKay. They could not have been nicer. They even made up a sign that said "awesome job CONNIE!", and they were ready to cheer that when we saw her.

This was Connie's 5th or 6th Marathon, and she had been training hard. Her goal was to do it in under 4 hours, and set a new personal best. There were various pace groups running. If you fell in with the 3:40 pace group, for example, and you were able to keep up with them, you would finish in that time.

Since the start time was 9:30 for women, I started to look for Connie at 1:15. It was hard to spot people since there were so many running by then. I saw the 3:30 pace group go by, then the 3:40, then the 3:50, then the 4:00. I kept a lookout until it was 4:15 after the start. I figured that I must have missed Connie in the crowd. Foud my way to the meeting place. It was a series of letters down the streets next to Central Park. I waited near the letter H for Hester. It turned out to be a long wait. There was and endless procession of finishers walking through a narrow isle in the crowd. A couple of hours later I saw Connie.

It turns out that she was in the 3:40 pace group. She was doing fine, and feeling great for the first half. After that, she started cramping up, and had to slow down. She wound up with a finishing time of 4:17, so I just barely missed her, assuming that I would have spotted her from my vantage point. I heard from the family that was next to me. They stayed at their post, but they never spotted their friend either.

Even though Connie did not reach her goal, she considers this the funnest Marathon ever. The crowds were great. They were very supportive. Many people wrote their names on their shirt, and the crowds cheered them on by name. The family next to me were cheering all the time. They were very positive and supportive. Most of the people that I met in New York were terrific. 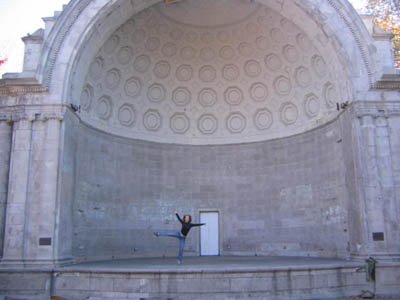 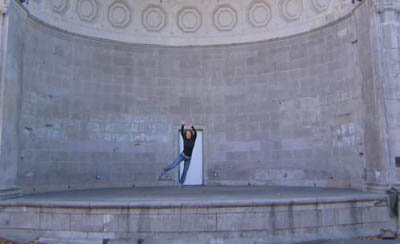 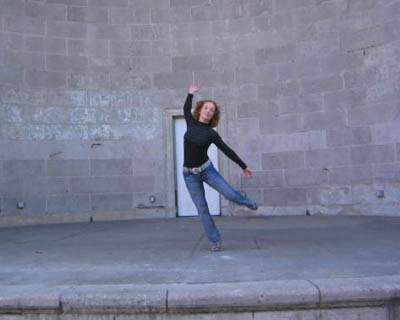 Monday was our last day in Manhattan. We took the subway to Central Park, and had a nice walk there. The leafs were falling, and it was warm and sunny. This is the Naumburg Bandshell which was build in the 1920s. It has seen performers such as Duke Ellington, Irving Berlin, and Benny Goodman. Dr. Martin Luther King Jr. Spoke here. I asked Connie to get up on the stage and do a little dance, which she did beautifully and in full. Connie is a marvelous dancer, and when she does it, it's poetry in motion. 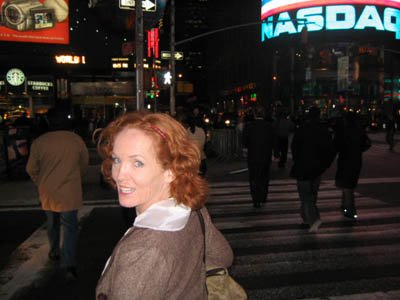 It's fun to walk around Times Square. Getting to see famous landmarks like 42nd street, and Broadway is a kick! 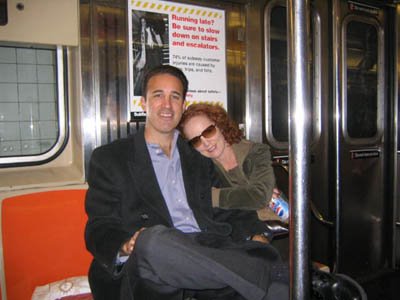 On Saturday, we rode the Subway for the first time. We went on the Subway a bunch of times after that. It's a fun, and inexpensive way to get around. Sometimes it's massively crowded, so you have to stand for a while until a seat becomes free. You've got to act quickly. It's every man for himself! 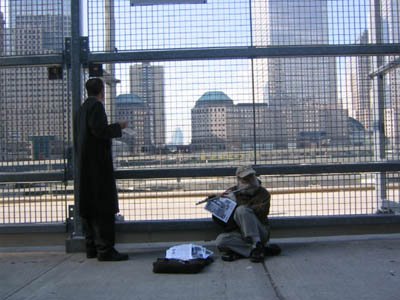 Stopping off at ground zero is an emotional experience. I was both sad and angry. Sad that so many had died on that spot, and angry at the people who would do such a dastardly act to the people of this great American city. 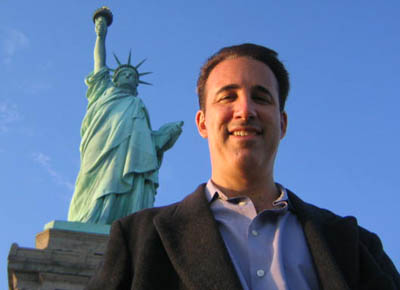 After ground zero, we hiked over to the battery where we took a ferry to Liberty Island. We were very lucky, and we got passes to go inside Lady Liberty. The Statue of Liberty is the greatest monument in the world. It is rivaled only the Eiffel
Tower of Paris. No coincidence, they were both designed by the same person. Here is a shot taken by Connie on Liberty Island. 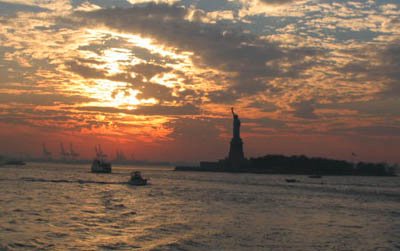 The statue looks especially dramatic as seen from a ferry on the Hudson river at sunset. There's still more of our Saturday in New York, but that will have to wait until the next installment...
Posted by Lee Hester at 2:22 PM No comments:

Connie and I just got back from our trip to New York city. It was the first trip there for both of us. We left on Thursday November 3rd, and returned to our home in San Jose California on Tuesday November 8th. Connie was entered in the New York Marathon, and she asked me to accompany her there. We had an absolute blast. We crammed an amazing amount of fun into four days. We stayed in Manhattan and spent almost all our time there. There is so much to see, that I think we barely scratched the surface. We were busy all the time. We wanted to grab a piece of the big apple with both fists. The excitement is contagious.

We stayed at the Hilton on 8th Ave and 48th street, in Midtown Manhattan. I was surprised to learn that most of the famous places that I had heard about in New York were on the island of Manhattan. It's just 3 miles wide, and 11 miles long, yet this small island contains huge world-famous places like the Empire State Building, Rockefeller Center, Central Park, Times Square, The Chrysler Buliding, The United Nations, Ground Zero, Grand Central Station, and much more. It is surprisingly easy to get around, and almost impossible to get lost. The city is a grid of numbered streets from the Bronx to the Battery, and avenues from the Hudson River to the East River. Central park is in the middle. You can get around great by walking. This is one of the greatest walking cities in the world. There is great stuff to see and do on every block. It would be much more trouble to get around by car. If you want to get around even faster, you can take the the subway system which is everywhere, and very easy to use.

We were very lucky. The weather was mild, and warm the whole time we were there. It didn't rain once. I think the weather was better at the beginning of November in New York this year than it was in the San Francisco Bay Area. Another surprise was how nice the people were. I kind of expected to see a whole city full of rude, loud, and pushy people. The people I met were mostly really nice. There are tons of people everywhere. They crowd the streets, the subways and the stores. I guess in an area this crouded you have to eather learn to love your fellow man or flee to the suburbs.

As you stroll down the streets of Manhattan, you are never far away from snacks such as a hot pretzel, or hot nuts from a street vendor. The pretzel is the size of both of your hands. It is light, fluffy, and tasty. I tried the hot cashews. They are candy coated, and come in a small white bag. They are delicious, and warm your stomach. I wish I had a bag of them right now.

New York is really as great as they say. This was one of the funnest vacations ever for me. I really enjoyed my stay there. I think that a guy like me could do pretty well there. It's like a convention all the time there. There are lots of deals to be made. I have a fantasy about moving there and opening a shop. Don't worry, I don't plan on leaving the Bay Area anytime soon.

I prepared for my trip by watching "On The Town" starring Gene Kelly and Frank Sinatra. The film is shot on location in New York, and the stars are seen dashing and dancing through many parts of town. I also prepared my itunes soundtrack of New York Songs. I'm still listening to them, they really capture the flavor.

Autumn In New York 4:38 Frank Sinatra Come Fly with Me 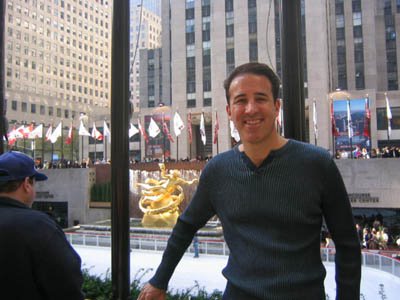 From Friday, a view of Rockefeller Center. 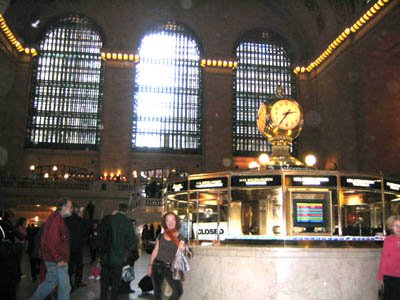 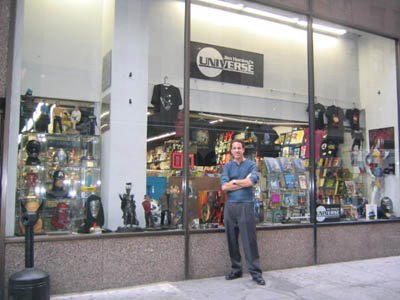 Jim Hanley's Universe Comic Book store. It's across the street from the Empire State building. It's a large store with an unsurpassed selection of new comics and graphic novels. 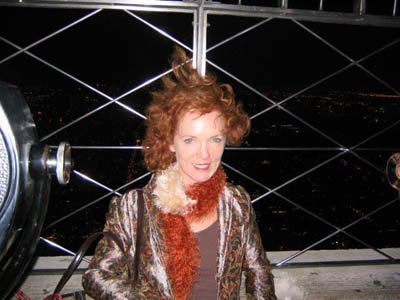 We had to wait quite a while to get to the top of the Empire State Building. The view is breathtaking though. By nightfall it was cold and windy. 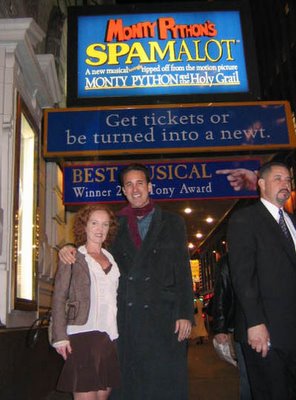 Month Python's Spamalot at the Shubert Theatre on West 44th street. It was a riot! It incorporates all your favorite Monty Python gags into a lively parody of a Brodaway Musical. It stars David Hyde Pierce and Tim Curry. The book and music are by Eric Idle. It's directed by Mike Nichols. Connie and I laughed ourselves silly. We had a great time.