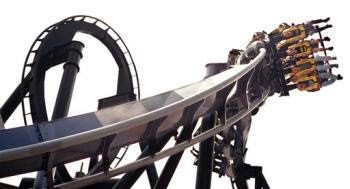 If you are riding a roller coaster and your cap blows off, I suggest that you spend $10 to buy a new cap, rather than climbing over the fence in an attempt to retrieve it.
Posted by Lee Hester at 12:02 AM No comments:

Posted by Lee Hester at 1:39 PM No comments:

I was relaxing in bed this morning with my wife Connie. We were both enjoying a lazy Sunday morning reading the San Francisco Chronicle. I got to my favorite section, the entertainment section, the Datebook or "Pink Section". I read a letter from the letter column with great interest, because it was about mix tapes, a subject dear to my heart. At the end, it stopped me dead in my tracks when I realized who had written the letter. It was from my friend Joe Field, the owner of Flying Colors Comics in Concord. I read it aloud to my wife. She loved the letter too, and pointed out that I had made her a mix tape when we fist started dating, and that the tape had make her fall in love with me. Here's the letter from today's San Francisco Chronicle Datebook:

Regarding the April 27 article by Peter Hartlaub ("Mix-tape memories"):
In the summer of 1976, I had the nerve to ask Libby, a lovely girl way out of my league, to a, gulp, Barry Manilow concert at Concord Pavilion. Surprisingly, she agreed, and it was our one date that summer before she headed off for a semester abroad in Vienna and I went off to San Francisco State. But something wonderful started that rainy night in Concord, and I wasn't about to let half a world get in between us.

Over the next few months, we wrote a number of noncommittal, how-ya-doin' letters back and forth, and in one of her letters she asked if I'd send a tape of songs I was into. Being a broadcast communication arts major, I had to do better than just slapping a bunch of tunes on a tape.

My friend Randy and I fashioned a mix tape featuring me as Libby's personal DJ: stories between songs, the worst jokes of the day, stretching tune titles into new meanings (Tower of Power's "So Very Hard to Go" was "the Ex-Lax theme song"), but trying my best to say something meaningful to her. I tried to let Boz Scaggs, Nilsson, the Moody Blues, James Taylor and even Manilow ("When will our eyes meet ...") be my voice.
Libby listened to the tape repeatedly, enjoying the music but not being swayed until her roommate asked if she was "really listening to what he's saying. The guy is crazy about you." Getting the message, Libby sent a mix tape in reply. She also spoke between tracks, and her voice and laugh melted me like butter in the sun. Two years later, we were married. And 29 years later, we still have those tapes.

I now hear my 20-year-old voice on the old mix tape and know, yet again, why I went into the sales and marketing end of radio (before moving into comic-book retailing 20 years ago). When I hear Libby's voice on that old tape, my heart still skips a beat, just as it has every day I've heard her voice for 32 years.

Frank Sinatra was originally slated to play Dirty Harry. He had to drop out due to hand problems, so the role went instead to Clint Eastwood. Here is an ad from Dec 1970 Box Office magazine when the film was in pre-production with Sinatra to star. I love Sinatra, but I have to admit that he was a bit past his prime by this time. I can't imagine that the film would have been as good with him as star as it was with Clint Eastwood. The ad looks pretty neat, though.

Posted by Lee Hester at 9:04 PM No comments: