Here's something that tickled my fancy, via the CGC discussion boards. 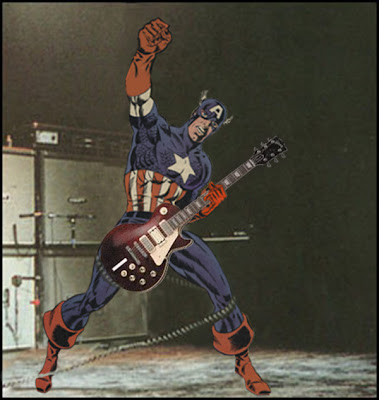 In case you didn't get the reference, it's a mash-up of the following two images: 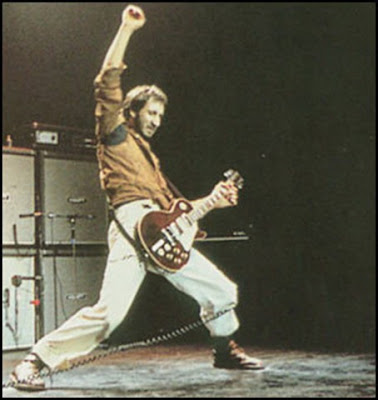 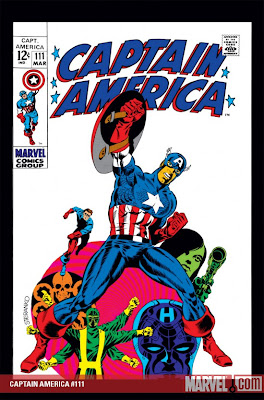 Two figures that rocked, the house, merged into one. Mash-up courtesy of Photoshop rockstar Flee Marquete
Posted by Lee Hester at 11:31 PM No comments:

WHAT A WONDERFUL WORLD

Here’s a Wonder Con report from a dealer’s perspective.

After a 2 year lay-off, I decided to get back into selling at big conventions. I figure that the times require a little bit of extra work. And let me tell you, setting up and selling at a large convention is major work.

Usually I take 2 booths, but as a cost cutting measure, I cut it down to 1 booth this year. It was going to be a real challenge to fit all the stuff I wanted to bring into one booth. I tried to sketch out a good layout on graph paper, but I just could not fit all the elements. I had all the stock and fixtures in my van, so I marked off a 10 x 10 foot area in masking tape on my garage floor. It was easy since there are tiles on the floor. Then I spent a few hours setting things up, and moving them around into different configurations. Finally, I came up with a workable layout for the convention.

This exercise helped me tremendously. When you are moving your stock and fixtures into a convention floor you are always in a big hurry, so it was a great help to know right away where to put everything.

Everything sold well in all departments. There was a great crowd, and it was nice to see that there was a big emphasis on comic books. People were hungry for comics. They were buying up the $2 bargain books. They especially liked anything by Jack Kirby. The wall comics sold well too. The high-grade books sold first. Also, nice copies of Thor and Captain America were especially popular.

One thing that was really nice was that a whole lot of people from my past stopped by to see me. This included several former staff members, including Rob Rheaume and Rita Pease. I also saw numerous store customers each day who stopped by to let me know how much they liked the stores. It was extremely encouraging to hear the praise.

I was able to buy some nice comics. I got some good golden age books from Brett of Brett’s Comic Book Pile. I got another small collection of Marvel silver age including several first issues like Silver Surfer #1 and Sub-Mariner #1.

Rich Koslowski is an artist and inker at Archie Comics, and he had some nice art for very reasonable prices. I’m talking about $10 a page. I picked up 3 complete stories penciled by Stan Goldberg, a legendary Marvel and Archie artist since the 1940s who recently retired. I figure I’ll salt these away for around 20 years and see what they’re worth.

The most exciting comic book deal was on low-grade copies of Amazing Fantasy #15 (The first appearance of Spider-Man) and Spider-Man #1. These were from a customer who bought them from me, but is now selling them to raise money for his son’s college tuition.

Speaking of Spider-Man, I congratulated my friend Phil Shafer of Comic Collector Shop for scoring the retailing coup of the decade. He’s going to have Smiling’ Stan Lee in person at his Sunnyvale store on Saturday. It’s going to be a smash, to be sure. Phil was kind enough to extend an invite to me, so I might just make an appearance.

I talked to Image partner Erik Larsen. He is going to be partners in opening a comic book shop in Berkeley in the former location of Comic Relief. It will be called Fantastic Comics. Uel Carter, who worked for Comic Relief will be another partner who, it seems, will be in charge of the day-to day operations.

Larsen was clearly very excited about opening up his own comic book store. He was just beaming. With the kind of resources and energy he has, and talented friends to do in store events, it would seem to be a sure-fire hit. A Crusher.

It’s hard work doing a show like this, and 2 days later, I’m still tired and bleary eyed. I guess it would help if I took a day off to rest. I’m very glad I went, and I look forward to next year, where I’ll get 2 booths so I can fit everything in ever better.

Now for a few photos:

Mark Arnold and I show off the Amazing Fantasy #15 and the Amazing Spider-man #1. Behind us, you can see more vintage comics. Comics were King at the WonderCon.

Rob Rheume along with former staffer Rita Pease and friend.

My son, Lee helped all 3 days, and on set-up, and the family joined us for a visit on Sunday.

There were plenty of people dressed in nifty costumes including this great one of Silk Spectre from Watchmen.

Greg Horn is an avid comic collector. Here he is seen enjoying his vintage Marvel comic that he purchased from me.

With the great one, Sergio Aragones.

My son took all pictures, and did a fine job.
Posted by Lee Hester at 1:29 PM 3 comments: