Here are some more great photos from the New York Marathon. These were emailed to me today by Ron Rotunno of New Jersey. I had a great time there with him and his kids Carol, Charles, Olivia and Raelyn. Too bad we never saw the folks that we were rooting for. Oh well, a great time was had by all nonetheless.

Posted by Lee Hester at 7:40 PM No comments: 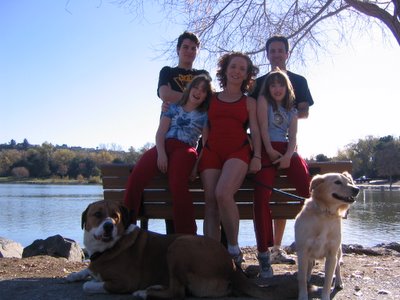 Here is our Christmas card for 2005. The picture was taken a couple of weeks ago at the Coyote Creek Trail near our home in South San Jose. Connie and I run here several times a week.

On Connie's right hand side is Hannah. Sophie is on the left. The girls are 10 year old twins.
The big dog is Humphrey. He is 2 years old. The smaller, standing dog is Molly. She is 4 years old.
The tall fellow on the left is Lee Hester 4.
The one on the right is me.

Merry Christmas from the Hester Family!
Posted by Lee Hester at 10:02 AM No comments: 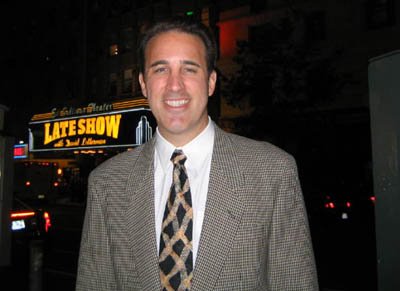 On Sunday night we saw another great show. It was "Forbidden Broadway" at the 47th street theatre. This is a very funny review with a talented 4 person cast-2 men and 2 women. They do a series of musical skits that rip into all the other Broadway shows. When you go see Forbidden Broadway, you see a bit of all the shows playing. I was laughing so hard at times that I almost fell out of my chair.

We finished the trip with a bang, as we had tickets for the Late Show with David Letterman on Monday. It turns out that they film 2 episodes on Mondays. The first episode featured Jennifer Aniston. There was a throng of photographers gathered around to catch a picture of her coming in. We were selected for the 2nd show, in fact, Connie and I were at the front of the line. We were issued numbered tickets, #1 and 2, and we were told to come back in an hour. We went across the street and had a nice elegant dinner, and came back just in time to go inside. Soon, they let us in to the Ed Sullivan Theatre's lobby. There we were "warmed up" by staff members. They wanted to make sure we laughed at anything Dave might say. They also wanted us to cheer and clap like crazy. There were also a bunch of things that they didn't want us to do. No standing up. No yahooing. No shaking hands. No calling out stuff from the audience. It was also cold. I had been warned about this, so I was wearing a sport jacket. For some reason, Letterman wants the theatre kept cold. Maybe it keeps the audience members more alert. Perhaps it keeps the flop sweat from forming on his brow. Who knows.

Finally they let us into the theatre. Connie and I were seated at the front row, to the left. A comedian came out and told some jokes, and they showed a few clips from the show. The band was introduced, and they started playing. It's an excellent, rocking band and they played several numbers that night. It was one of the highlights of the evening. When the band ended it's first number, David Letterman came running out on stage at full speed. He made a quip or two, and answered a question from the audience. The band played another number, and then the show started. The special guest, Ted Koppel was announced. Dave came out and did his monologue, and the audience dutifully laughed at everything he said. I liked the part where the man on fire came out. Ted Koppel was excellent as always. It was a lively show, and well worth attending.

That evening we watched some of Monday night's episode from our hotel room. Connie was a bit disappointed that we had not been in on that evening's taping, as the male and female marathon winners went down the isles, high fiveing everyone. They also had comedy bits about the marathon.

New York was a lot of fun for us. I hope to return from time to time. Perhaps I'll conspire to attend a comic book convention there in the future, or go to an industry function there, as Marvel, DC and most of the comic book industry resides there.
Posted by Lee Hester at 8:31 AM No comments: