The Top Seven Comics Creators who can KICK YOUR ASS

Here's a great blog post about real-life kick-ass, macho, he-man comics creators from comics lunatic Ty Templeton. Warning, it's not suggested for sissies, or people who drink their tea with upraised pinkies. The line up of brawlers Includes "Jaunty" Jim Steranko, and Jack "King" Kirby. The only serious omission is Daredevil artist David Mack, who I've personally seen doing all the moves that Daredevil does in the comics.
Posted by Lee Hester at 12:31 AM No comments: 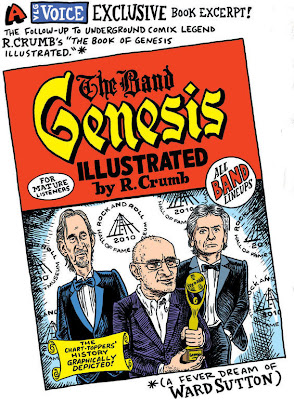 This one is brilliant! You've got to check it out. It's Genesis, the band, by R. Crumb as imagined by Ward Sutton.

Make sure to check out all 11 pages!

This is the first Wonder Con that I have not set up a booth at.

I headed to San Francisco with my friend Mark Arnold. I met up at the Convention with my son, and his girlfriend. My goal was to hand out some flyers for my store, so I deputized my group. After we handed out a box full, the powers that be informed me that handing out flyers in the building was forbidden. I complied with them, and stopped handing flyers out. We went upstairs for a while, and then went across the street and hung out at Starbucks, where we chatted, looked at the program schedule and had some snacks. Rather than sit in a long line, and activity I try to avoid at all times, I figured that we could just cruise in a little after opening time, like civilized people and get right in. That strategy worked like a charm!

The staging area on Friday.

We managed to hand out flyers to most of the people here until the powers that be converged on us.

Here's the view from above.

Here I am with Bob Schreck one of the greatest comics impresarios in history.

Here I meet up with the Devil. He goes by the name of Robert Rhine, when he travels above ground. He puts out a magazine for his subjects called "Girls and Corpses". I haven't yet made a pact with him, but I'm thinking it over!

Here's the legendary Joe Kubert, one of the greatest comic book artists in history! I love his Sgt. Rock and Enemy Ace. What a terrific artist!

The highlight of the show for me was definitely the Stan and Hunter Freberg panel, hosted by Mark Evanier. If you are a comedy or animation fan, you already know about Stan Freberg. I didn't know as much about his work producing television commercials. They played some samples, including a fussy Englishman who hated prunes, and Ann Miller dancing on a Coffee can. The audience loved them. I would love to see more of these. The stories that Stan and Hunter told about making these were hilarious. I'll have to see if there's a DVD collection of these.

There were plenty of people there in costume. I think it's great. It makes it costume optional masquerade party.

Here's my boy, Lee 4 clowning around with his pal, the great Matt Wagner of Mage and Grendel fame.

Here I am with Mimi Cruz and her cousin. Mimi runs one of the best comic book stores on earth, Night Flight comics in Salt Lake city.

Here are the nutty guys behind the great comic-centric rock band "Kirby Crackle".

Here's my pal, Dapper Dave Downey, proprietor of World's Best Comics in Sacramento. To the shock of all, he has actually dained to bring some comics to the comic book convention!

Here are the fine folks at the Flesk Publications booth. Master artist Mark Schultz of Xenozoic Tales fame is on the right.

There was no paucity of movie-type stuff on the floor. This one at least has origins as a comic book.

I'm not sure what this one was.

Random crowd scenes, within and without.

The artist for Boom Comics' Toy Story. Unfortunately I didn't write down any names.

Saturdays highlight was the Mark and Sergio show. I was luck to get in as it was completely sold out, and standing room only.

Here is best selling author Max Brooks. I just found out that he is the son of Mel Brooks and Anne Bancroft!

I invited my friend Walter Fields to the show, and he came on Saturday. Here is Walter, Mark Arnold, Lee 4 and Me. Goodbye Wonder Con. A great time was had by all!
Posted by Lee Hester at 1:02 PM No comments: