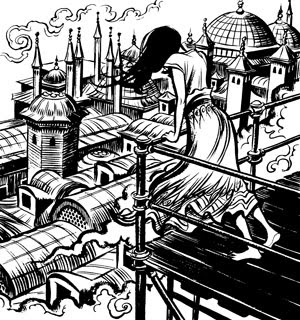 Speaking of Craig Thompson's Habibi, there is a wonderful article about it thes weeks' Metro Magazine by the always informed and insightful Richard von Busack. Pick up a copy if you live in Silicon Valley, or read it online.
Posted by Lee Hester at 9:01 PM No comments:

Before I start with the usual photo parade, I should catch you up with the story so far.

We were scheduled to host Craig Thompson at our Mountain View store on Thursday. His publicist needed to cancel at the last moment due to circumstances beyond our control. We rescheduled Craig's signing for Noon at our Ape booth. We were already planning on hosting underground Zap Comix artists Spain and S. Clay Wilson at the same time. My back went out a week before, so I was not planning on going. My back has been getting better, plus I felt that excitement was mounting. It was going to be a big deal, and I should attend, back or no back.

Here's a shot of the convention floor at around 9:00 am. Mark Crane, Clay, Mark Arnold, My Son Lee, and Nik are starting to bring the fixtures and books in from the van.

Nik Houser, Lee Hester IV, Mark Crane, Lee Hester III.
Okay, after a around two hours of fevered work, we have our five booth spaces shaped up into a pretty good temporary storefront, complete with a podium conaining a battery operated cash register and merchandise bags, and flanked by two signing areas. We hooded up a plug-in credit card reader from 'Square" to my son's Android phone, and we are also good to take credit cards. My son is impressed by the set-up.

Craig Thompson and me.
It's noon, and Craig Thompson arrives for his signing. We have 50 copies of his new Habibi book, a wonderful hardcover. Over 600 pages for $35. We also have plentiful copies of Blankets, in hard and soft cover. We have the now out of print original soft cover edition of Blankets. We have Goodbye Chunky Rice and Carnet De Voyage. All these books came in real handy, as Thompson's appearance was an absolute smash! Later on Thompson did a signing at the Comic Book Legal Defense Fund booth. They had a huge stack of Habibi there, as well, and were charging a recommended ten dollar donation for signatures. Despite the additional cost (to help fund a very worthy cause) the Legal Defense fund sold out of all copies. In fact, by the end of the first day, I understand that the entire convention floor was completely sold of of Habibi. It's an absolute smash hit. Readers adore Thompson's work, and he is on the cusp of becoming a major super-star!

Thompson sure was nice to the fans! He gave tremendously of himself the whole time. He did sketches for everyone. He posed for pictures for anyone who asked.

On the other side of the booth, we have...
Hey you! Captain Photobomb! Get out of the picture!

As I was saying, we have Publisher Dan Fogel, Spain and S. Clay Wilson with their assortment of delightful underground comix.

A look at one of the delighful sketches that Thompson was doing, gratis!

Some of the many delighted fans.

It was a real pleasure meeting and spending time with Craig Thompson. He's a really nice guy, and I believe, one of the most gifted graphic novel creators of all time. I think he may be one of the great voices of a generation.

After the signing, I had the pleasure of taking Craig and my Son out to lunch at the burrito place around the corner. We had a delightful conversation, as Craig filled us in on the creative process. My son is a terrific artist, and I am a huge fan, so we were both quite captivated by what he had to say.

Here's some nifty news. Craig agreed to appear in person at Lee's Comics for his next book. Tuck that away in your memory bank. It will be a wonderful day when it comes to pass, and this time, you MUST attend!

I won't be returning to Ape. I'm going to stay home and rest my back a bit. I'm going to rely on the other reports, both posted, and the ones told first hand to customers who I talk to, to find out what happened at the rest of the show. If you attend Ape on Sunday, make sure to stop by the Lee's Comics booth at the end of the hallway.
Posted by Lee Hester at 8:03 PM No comments: