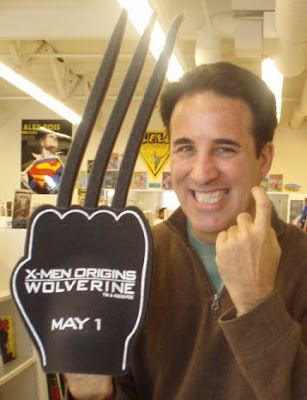 Yesterday we received 4 huge Federal Express boxes. They were all full of over-sized foam wolverine mitts just like the one pictured. Evidently the movie studio sent them out to promote the upcoming movie. Hurry on into your local Lee's Comics and pick up your very own, absolutely fee of charge, while supplies last. Make sure to wear yours to the premiere! That's a mitt that just screams "We're number one!"
Posted by Lee Hester at 3:26 PM No comments:

I'm not much for My Space and Facebook, and I definitely don't Twitter. They all seem like a big waste of time to me, plus, there is WAY too much spam. Everybody is trying to sell you something. Just what this world needs. More ads!

I did join Netflix recently. My goal is to finish seeing the films that are generally recognized as the best ever. Right now I am working off the list from the internet movie database. They have a list of the top 250 films as chosen by their readers.

I looked over the list, and made a list of the films that I have not seen, and added them to my netflix cue. I have been watching these movies. I must say that the results are very good. I am seeing a much higher percentage of films that I really like, rather than by choosing films that look good at Blockbuster, or Comcast on Demand.

I just finished a really thought provoking and challenging film. It's "Requiem For a Dream." I recommend it highly, but must warn you, it's not for the squeamish. I had to stop watching it, and I returned to it the next day. It was just too disturbing. I found out that it was directed by Darren Aronofsky, who also directed "The Wrestler". He also directed the movie "PI", which is also highly regarded. Since I like the director's work, I added PI to the top of my cue. I'll get that in a couple of days, since I am returning "Requiem" tomorrow.

The funny thing about Nexflix is that my cue of movies is getting longer and longer. You would think that it would get shorter as I exhaust the great films. One great film leads to another as you discover another great Actor, Writer, or Director.

If you are interersted in finding out which movies I rate most highly, you can become my Nexfix friend. Just click on the link. Right now, I just have hundreds of ratings, but I will start writing reviews as well. If you like my taste in movies, I might like yours as well.

This seems like a decent purpose for social networking.

Better than "Twitter My Face Dot Com". (KGO Radio Traffic Man Stan Burford came up with that one yesterday.)
Posted by Lee Hester at 12:45 AM No comments:

Looking at these Scopitons makes me think of my very favorite practitioner of flimed singing and dancing.
That would be the inimitable Gene Kelly.

My favorite film is "Singing in the Rain", starring Gene Kelly.
It is as close to perfection as anything man has yet created.
Kelly made scores of great films. Some of my other favorites are "The Pirate", "An American In Paris", "Cover Girl" and "On the Town". If you are not yet a fan of Gene Kelly, this AMC tribute by Christopher Walken will make you one.

Here is one more Scopitone. It stars the Kessler Sisters. It's fun, elegant and classy. It's like something you would see in a Gene Kelly movie.

I attended the KFJC Psychotronix Film Festival on Saturday, and had a grand time. For those not familiar, the film festival features interesting and unusual 16mm short films. Saturday's program featured musical shorts.

The first few films almost knocked my and my friends out of our chairs. I had never seen anything like them. During intermission, I asked the organiser, Robert Emmett about them. It turns out that they are called "Scopitones." They were made for special video jukeboxes in the early 1960s. The Scopitone jukeboxes were expensive, and they never really caught on. There were only 500 of these sets made. The Scopitone videos were only made for a few years. They started in France, but made their way to America.

I bet that very few people know about these today.

Most of the videos centered around women that were curvy and easy on the eyes. The color and sound are vivid, and the dancers grin gleefully. A typical one is below. Keep in mind, these have much bigger impact on a larger screen, but the You Tubes will give you the general idea of what a Scopitone is like.

Here's a really outstanding one that's a little different:

Here's a neat one:


I hope you enjoyed these. I love them! If you want to see more on You Tube, just search under Scopitone, or click on the link.

If you want to order some Scopitones on DVD to watch at home, go to the Scopitone web site.

As I mentioned at the top, I just discovered these yesterday, and they are my new mania.
Posted by Lee Hester at 11:16 PM 2 comments:

There has been much debate about Microsoft Comic Sans lately.
I am not a fan of this font, as you will see, if you follow the links.

Heidi MacDonald (The Beat) published an article about the creator of this font, and I posted a comment.

The very next day, my comment was reprinted on Letterer extraordinaire Todd Klien's blog. He went on to do a detailed analysis of the many failings of Comic Sans.

Its really gratifying to put forward a view on a certain subject, and the very next day receive a detailed examination by one the world's leading authorities in that field.

The subject of Microsoft Comic Sans might not be life changing or earth shattering, but by gum, I was thinking about it, and now I know all about it.

That's one of the really cool things about the internet. Most of the time we just waste time on it, so we forget what an awesome resource it is. You get instant access to a vast universe of information and expert analysis. You could even, theoretically, use it to get info about something important! Not on my blog, though, I deal strictly with trivia and ephemera. That's how I make my living, too. I don't sell a single item that you need. Just stuff that you want. None of it is vital for your survival, but somehow it makes life more fun and interesting.
Posted by Lee Hester at 1:01 PM No comments:

The Virgin Project is a new graphic novel project by K.D. Boze and Stasia Kato. It's a whole bunch of true stories about different people's first sexual experiences. The names have been changed to protect the formerly innocent.

This is a surprisingly engaging collection, and it grabbed me immediately. The stories are quite democratic. There are sad stories, happy ones, funny ones, straight, and gay. Regardless, they all touch on something universal in all of us. Truth is stranger than fiction, especially when it comes to the bedroom, or the backseat of a Caddy.

This material is for mature audiences, but not what I would call pornography. As a parent, you might even want your children to read it. Perhaps they could avoid some of the situations depicted therein.

The Virgin Project is a 142 page Trade Paperback, Color and Black and white. It sells for $25. It has not yet been widely distributed, and we bought our copies from the publisher. It's on sale now at both Lee's Comics locations. For those of you that can't make it to the store, you can order by mail.

I recommend this book highly.
Posted by Lee Hester at 5:37 PM No comments: