HOW TO SCREW UP YOUR BUSINESS 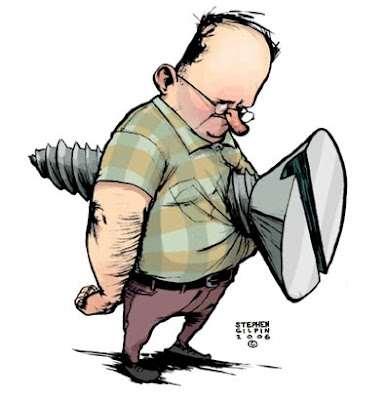 As a home-owner and a business owner, it falls to me to make repairs. I wind up going to the hardware store about once a week. There is an Orchard Supply Hardware right by my house in South San Jose, and another one right by my Mountain View store. I usually go to Orchard. I like the service and I know the layout. They usually have what I need. Now and then, I have to go an extra mile or two to the much larger Home Depot for a part that OSH doesn't carry. I am pretty familiar with OSH and Home Depot. I've been to both places hundreds of times.

Today I noticed that one of the back-issue bin sections was sagging. The problem could easily be fixed by installing a couple of corner braces. I've got lots of them at home, but none at work, and I wanted to fix the problem right away, so I headed around the corner to the OSH on Charleston Road. It's only about half a mile away from the store. Something looked amiss as soon as I entered. I saw that the shelves in the back of the store seemed empty.

I headed over to the hardware section and began looking for a box of 3/4 inch screws. They didn't have them! There were lots of empty hooks where they should have been, but no product. I didn't worry about that too much as the corner braces would probably come with their own screws (although not quite as heavy duty as I like.)

I then went over to where the angle braces should have been. Again, empty shelves greeted my where the product was supposed to be. I did find some angle braces that were not quite the size and style that I was looking for. They were also copper colored, and I wanted metal color. It didn't matter too much. No one was going to see the angle braces. I figured that I would make due with those.

I flagged down a worker, and asked him what was going on with the stock at the store. "Why isn't Orchard ordering more product for the shelves?", I inquired. I showed him all the empty shelves that were supposed to display the product that I was looking for. The worker told me that Orchard put in the orders, but the factories were slow in delivering the goods due to the slow economy. He told me that he gets asked that question about 10 times a day, and that he feels he should print up a card with the answer for all the people that ask him.

I thanked him for letting me know, and I didn't tell him, but I have a hard time believing his explanation. He might well believe it himself, and it may very well be something that a superior told him, but I don't buy it.

For one thing, as I mentioned, I go to hardware stores frequently. About once a week. I mostly go to Orchard in South San Jose, and I haven't before noticed empty shelves or a lack of inventory. Now I don't go to the Mountain View branch nearly as much. The problem could be limited to just that branch.

I suspect that the Mountain View branch is experiencing some kind of trouble. Perhaps it's a trouble with management. One thing is for sure, when you go to a hardware store it's usually because you need to fix something in a hurry. If you go once, and there are empty shelves where the parts you need should be, you will go elsewhere. The next time you need something, you might not even try that place again, so you won't know if they got their act together or not.

It's really easy to blame the bad economy for everything. The Mountain View Orchard Supply Hardware had better find a way to stock the products that people want, and they better do it fast, or they will soon go under. They can't afford to have a store full of half-empty shelves. It's either fill those shelves up with the parts people need, by hook or by crook, or close. When people need hardware, they need hardware, not excuses.
Posted by Lee Hester at 6:48 PM No comments: 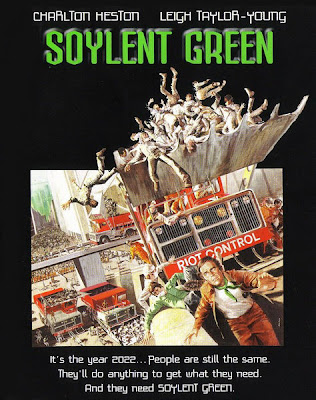 I just got around to seeing Soylent Green for the first time. Somehow I got it into my head that it was a trashy movie. Maybe all the spoofs and parodies of it colored my judgment. I started watching the DVD expecting some trashy fun.

My expectations changed very quickly. The film starts on a very strong footing with a musical photo-montage that deftly conveys the effects if the industrial revolution, overcrowding, and pollution. There is another montage near the end of the movie, as well. These portions of the film are incredibly striking and powerful. It's some of the most evocative film-making I've seen. They are the high points of the film, and are so bold, that they would be reason enough to see this film.

The rest of the film is uneven, but it's still watchable and compelling. There is a great deal of provocative material here, and it will have you thinking about it for days.

The film is set in the future, but most of the sets look like the early 1970s, when the film was made. One exception is an upscale apartment where the rich folks live. It has an interesting white-hued futuristic look. The apartment comes complete with what, at the time, was a great futuristic advance-one of the first arcade style video games, created by Nolan Bushnell who went on to found Atari. It probably looked pretty cool at the time, but now it looks like a primitive version of Asteroids. It doesn't help that the actress playing with it does not seem to have a clue how to operate it. Her ships keep dying every second or two, yet she is oblivious to this and acts like she's having a grand time. Couldn't someone on the set have spent a few minutes teaching her how to play it? Despite all that, I thought it was a neat scene, and I was pleased to see that vintage game. I think i remember playing it!

You have to make allowances. We are a bit spoiled now. Movies such as Blade Runner and the 5th Element have a fully realized futuristic world with all the little details shown to perfection. You almost take that for granted now. Video games have come a long way, for that matter. I hope we don't get so spoiled by the current technology that we are no longer willing to supply some of our own sense of wonder.

In Soylent Green, you don't see a thing that suggests a futuristic world for much of the picture. This can be forgiven because there is great acting by the principals, Charlton Heston and Edward G. Robinson in his last film appearance. There are also a profusion of thought provoking ideas. You probably know the shock ending of this film. Few people won't know the big reveal going in. It's common knowledge whether or not you've seen the film. That's not the main attraction of the film. Enjoyment of it does not depend on the shock ending.

Soylent Green is not a trashy movie. It's a great , thought-provoking near masterpiece with good acting and great scenes. If you are a film buff, or a science fiction fan, you'll definitely want to see this one. Check it out if you have a chance.
Posted by Lee Hester at 9:32 PM No comments:

THE TEN BEST GRAPIC NOVELS OF ALL TIME

I have spent much of my life promoting Graphic Novels as an art form. I do that at the stores, at conventions, online, and in the media when opportunity arises. I am quite happy that Graphic Novels have gained a much wider appreciation in mainstream society in recent years.

In my efforts to expose more people to the joys of Graphic Novels, from time to time I compose a list of the Best Graphic Novels of all time. Naturally, these kind of lists are always subjective. It's an art, not a science. I hope that you will agree, however, that there are some worthy picks here. The selections are in alphabetical order.

Jimmy Corrigan, the Smartest Kid on Earth by Chris Ware

Tale of One Bad Rat by Bryan Talbot

Some pretty nice books there, don't you think?
Well if you agree that these are fantastic books by amazingly talented creators, you will be happy to know that the creator of one of these books will be appearing at Lee's Comics in Mountain View next month to premiere a brand new Graphic Novel!

Can you guess who it is?

Let me give you a couple of hints.

Fist, the creator has never appeared at Lee's Comics before. Second the creator does all the writing and artwork for his Graphic Novels. That should narrow down the list quite a bit!

Let's see who will be the first to guess the identity of our next in-store creator appearance!
Posted by Lee Hester at 5:47 PM 1 comment: